After some uncomfortable travel; are the airlines making those coach seats smaller? I arrived in Santo Domingo. Arriving at 2am meant that I was ready to go sleep and leave the second part of the journey for another day. With some running around to be done to get my bike ready for the second leg of my travel it took almost the whole day to set, but in the end I was to ready to go and travel to Samana.
Upon arriving to Samana I was greeted by the provincial team president and shown to my apartment for the weekend. The weekend consisted of not only Nationals but an open water swim event the Saturday before the race; I was scheduled to do both.
The open water swim went quite well and the distance of 750m was suited for a good activation and some sustained threshold work to get me ready for the triathlon the next day. With no waves in sight, the smooth open water lulled me easily into a smooth rhythm like in the pool and allowed me to stick to it.  The race went off without a hitch even though we were racing late in the afternoon, which meant that the jelly fish were in full force, typical of the area of Samana.  After a fast start to race and some juggling for position I was able to take lead and maintain it to the end.
The next day, came the main event: the triathlon. After a quick start, I was able to open up a gap just before the 1st buoy. Maintaining my pace meant that I had a sizeable lead heading into T1. On the bike course I just worked on maintaining my gap in relation to my pursuers , and managed to hold them off until the last lap, when a torrential downpour started to wet the street and made bike handling with my slick tires very unnerving. After a couple of back wheel slides, I decided to be on the safe side even if it meant giving up some time, but it was too late, for on one of the roundabouts, I wasn’t able to steer the bike and headed straight up onto the side walk. Thanks to a little bit of luck and a lot of bike handling skills, I was able to bunny hop onto it and come out unharmed. That meant I lost almost all of my lead and continued losing time from that point because of my reluctance to take the corners anything but gingerly. By the time I headed into T2 my pursuers were right on my heels. It took me at least the first kilometer of the race to find my pace. By this  time I was on the cross country part of the course so I had to adapt my stride to the terrain, but after 2 laps I had widened my gap and was able to coast to victory.
Thanks to ChampionSystem, OakleyRD and Strictly Bicycles for their support. Also to my training groups and training partners for getting back on track this summer.
Here are some pics from the race and a link if you feel like going through the album (pics taken by Enmanuel Jimenez Ayala) 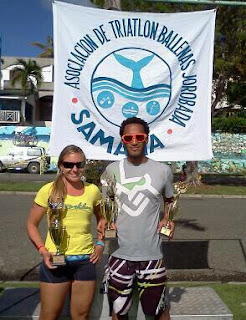